The stoic walls of Ahsan Manzil in Old Dhaka were alive again last Thursday night. In the times of the nawabs, the dome of this palace was perhaps the highest point of Dhaka, drawing intrigued people from all over. On the night of April 1, there was a gathering of not nawabs and zamindars but of admirers of haute couture and connoisseurs of art. The occasion was the fashion show arranged by Tootli Rahman. 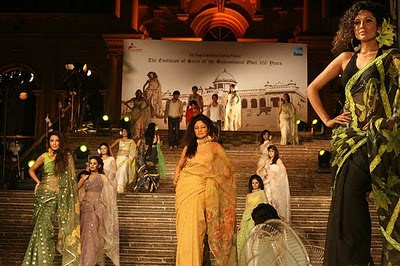 Titled, “The Evolution of Saree of the Subcontinent over 100 years,” the event was sponsored by City Bank Ltd and American Express. The audience was mesmerised by the razzle-dazzle, opulence and intricate embellishments; and the models looked good too. The palace wore a festive look and the allure of saree amazed all. Saree is undoubtedly the simplest yet most beautiful garment but many people are unaware of its history. The aim of this show was to discover it, in fact to relive it. First came a simulation of the Mughal era. The models descended from an elephant. The segment began with a dance. In this era sarees were not so prevalent, and were heavily embroidered with zardozi work and semi-precious stones. The embroidery was done using real gold or silver threads. After the Mughals came the Zamindars in a horse-drawn carriage. This was also the time when the British ruled the subcontinent. The saree then was worn in the ek pyach (draped around the body in a single wrap) style. The ladies of the Tagore household updated and changed the way saree was worn. 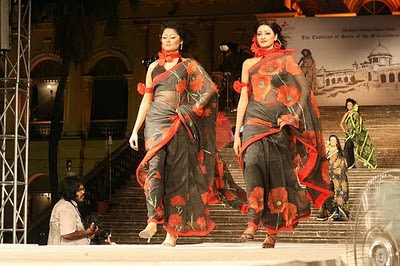 The late 1800s paved way for the Victorian style of long sleeved blouse, and saree camouflaged as gowns, accessorised with hats, gloves, lace ruffles, capes and more. In the 1940s and ’50s women of the subcontinent followed the style of Indian filmstars and a number of new styles were introduced, such as short blouse, which was in contrast to the conservative style of the Brtish Raj. High neck, short sleeves popularised by Suchitra Sen and her contemporaries also made an impact. The next two decades were influenced by the Hippy style. Women wore go-go glasses, large hoop earrings and large necklaces, and their sarees were heavily embellished with flowers and vibrant colours. In the disco era, the glitter, the shimmer and the gloss reigned supreme. As a new nation was born in 1971, saree also found an expression and acceptance. The Bangladeshi role models were Kabori, Shabana and Bobita. In this segment models in green and red took over the runway. The 1990s said goodbye to the glitz of disco, and embraced a style that was more elegant and subdued. Nakshi Katha, vegetable dyes, Mipur and Tangail sarees became popular. Around this time we also rediscovered a heritage — the Jamdani. From 2000 onwards fashion in the subcontinent has seen vibrant colours, subdued blends, fusion, influence of Hollywood and Bollywood and perseverance of our own traditional forms. “The saree evolution will continue if more support is given and women are encouraged,” said fashion designer Tootli Rahman. “We did a show in Lalbagh celebrating 400 years of Dhaka. I wanted to do something particular on sarees and thought that Ahsan Manzil would be a great venue for the show,” she added. The process was arduous, but the Cultural Ministry was very supportive. I had been dreaming about this for the last five years. What my grandparents used to wear — the styles and trends of those days inspired me. Everything has changed but history also repeats itself. It was wonderful working with all the people who have supported me,” Rahman said. The show was choreographed was by Tootli Rahman. Assistant choreographer was Luna; make-up and hair was by Kaniz Almas Khan of Persona. Jewellery were provided by Purobi Jewellers. The chief guest was Dr. Shirin Sharmin Chowdhury, Ministry of Women and Children’s Affairs. Media Partners were Channel i, Radio Foorti, Canvas, Dia Asiana and Ice Today. Square Toiletries Ltd., Marico, Golden Harvest, Aqua Paints, Infrablue Technology and RC Cola also sponsored the show.

Fashion a word that is often used to theorize a society’s most talked about generation. Forgotten are the days of socialist revolutionary heat pumping through the veins of the young and the restless or the poetic drive of Rabindranath that used to define this generation. Kids nowadays are more into the whole cell phone/straight-hair poodle styles. Even if it was pretty hard to imagine just a decade ago what this generation has turned into its fun now when we track it back to the times when cable TV waltzed into the city. And now each group has its own style in the varsity campus. Starting from of course, what brand of cell phones they use, what type of hair spikes they prefer, what brand of watch they show off and the pair of jeans they wear.

And girls going out of their ways to match their flipflops with their blouse, bag, the pouch inside their bag, earrings, cell phones, contact lens…and the infinite list goes on!

Extremities aside, the campus fashion nowadays swings both ways for men and women craving for that urban look while holding their own roots. They go for the raw trend that shops like Jatra, Deshal, or Piran subsists to set.

For women the obsession for straight hair still persists with full force. Short kurtas worn with embroidered jeans became fairly popular in the last few years. Metal bangles and clay ornaments from Shadakalo, Aarong, and other designer boutiques compliments such attire. Interestingly enough, the most popular stilettos that used to be the in thing just a few years ago has been drastically replaced by the almost flat sandal/strap on shoes similar to those of the ancient Greek mythical characters used to wear. Silver toe rings seems to go nicely with these strappy sandals while nose rings and other accessories harmonizes with the raw beauty that the girls go after. 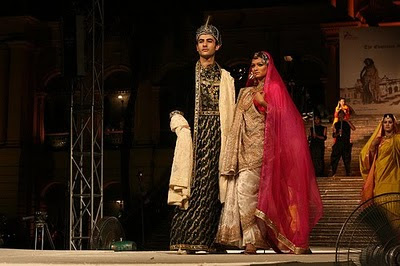 Guys on the other hand are becoming more metro these days. Headgears are what comprises most of what they call fashion. Bandana is most common among the men in the campus that would obviously go with the “hot bike owner” look (even if the bike is missing from the picture). But in a typical day with scheduled classes back to back, guys are mostly seen to wear quarter sleeved t-shirts with a contrasting shirt on top. Body piercing nowadays took a steep turn towards metro urban looks the guys go after. Even though tattoos are considered taboo, one can still take a little peak at the most unimaginable part of the body and find one!

Incidentally, the campus trend says more than just what people wear or carry these days. The name they go by says a lot about their fashion sense as well. For instance, a few days ago I heard someone yell out “Kasper!” whose real name turned out to be Kashem uddin. Go figure!

Call them annoying, or superficial, or simply “beyadopp”, they are the new generation who brings most of the colors, diversity and sometimes a breath of fresh air with them and their diverse fashion.