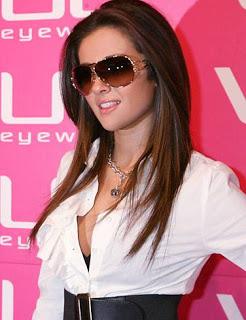 Giorgia Palmas: you probably already know her. Just a glance to the picture in this article and you will recognize her instantly: that picture is all over the internet, and for a good reason. Born in Cagliari in 1982, Giorgia is one of the many “Daughters of Sardinia” that took Italian television by storm, showing to everybody how gourgeous the girls hailing from Sardinia are.

Like fellow Sardinian Elisabetta Canalis, she became famous as one of the “Veline”, the scantly clad dancing assistants in the Striscia la Notizia satyrical newscast. Before that, she arrived second place in two beauty pageants (losing one to her cousin Francesca Lodo). After her stint at Striscia la Notizia, she went on hosting a few more TV show, gained further notoriety with her calendar (from where the picture on the right comes from) and now she is enjoying an acting career in the tv show “Carabinieri” and in the show of improv theatre “Buona la Prima”.

Michelle Hunziker was born in Switzerland in 1977, but has since obtained Italian citizenship. Her gorgeous smile has instantly won her the affection of the Italian tv audience. 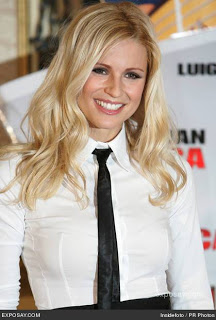 Michelle started her career very young: at just 18 she already was famous for being one of the most sought after fashion models, for being the face, or rather, the backside, of the Italian lingerie brand Roberta and for heir marriage with one of the most famous Italian pop singers of the time: Eros Ramazzotti.Marrying Eros Ramazzotti transformed Michelle from well known model to instant superstar. She left the catwalks to land roles ad host or assistant in many TV Shows in Italy, Switzerland and Germany.
Today, may years later, Michelle Hunziker is still one of the most loved faces on Italian TV. She hosted many important TV shows, like Striscia la Notizia and Paperissima and recently gave proof of her exceptional skills as dramatic actor, singer and dancer by leading a stage adaptation of “The Sound of Music” and as a comedy actress in the Italian version of Canadian TV sitcom “Love Bugs”. She also partecipated in many popular Italian movies, like the “Vacanze di…” series and lent her voice to the character of Gloria, the she-hyppopothamus in DreamWork’s “Madagascar” movie.

Alessia Marcuzzi is one of the few showgirls that is equally loved by men, for her looks, and by women, for her free and cheerful spirit. The Roman showgirl, born in 1972, has a long career behind her. 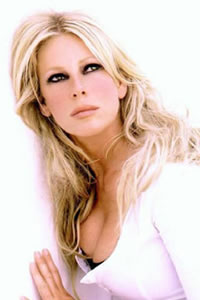 Alessia has been in the last 5 years the host of the Italian Big Brother. Before that she hosted Le Iene, now replaced by Ilary Blasy, and many music programs and shows. Her almost perfect figure is the result of the hard training she underwent while practicing atlethics in her youth. Like many other colleagues, the blonde – but her real hair colour is red – bombshell has her breasts retouched by a plastic surgeon. But contrary to almost all of them, she actually asked for a reduction of her generous size. Alessia followed the path traced by many other Italian showgirls and dated for a long time on of Italian football superstars: Filippo Inzaghi. They went separate ways a few years after the birth of their son. Alessia Marcuzzi is an all around artist. She not only hosts some of the most famous Italian shows, she is also an accomplished actresses, having played in movies like “Il Mio West”, with David Bowie and Harvey Keitel, and many sitcoms. She posed with few to none clothes on in many popular calendars.

Thanks also to her love story with Inter footballer Christian “Bobo” Vieri, she then became a regular participant in football tv programmes – and the fantasy of many football tv fans. On top of that, her love story with Vieri has been an excellent matter for Italian gossip magazines, as the couple can be awarded a prize for their infinite number of break ups and “get backs” ‘get backs’ reconciliations. She is again at the center of the gossip scene, since she is now dating George Clooney. and there are insistent talks of a wedding in the coming months.

Manuela Arcuri
was born in Anagni, not too far from Rome, and started as a model before becoming an actress and one of Italy’s favourite calendar women.

She’s perhaps the most typical of Italy’s sexy women – what with the television appearances, a footballer as an ex-boyfriend and plenty of work as a lingerie model! Manuela is a real beauty. Perhaps, a few more years at an acting school would have done the trick.