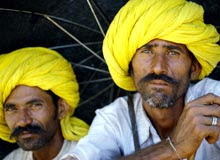 Rajasthani TurbansIn India, one can spot many men wearing turban. Well, turban is tied not for the sake of fashion, but because it has a lot of significance in the lives of Indians. The hair turban is a headdress that basically consists of a long piece of unstitched cloth, which is wrapped around the head. The hair turban used in India is usually 5 meters in length. Each time, the wrapping is unfolded and tied all over again.

The turban more commonly known as pagri was initially tied to keep the head cool. It was actually a way to escape from the blazing heat or to put succinctly a means to beat the scorching heat of sun. To cope with the hot climatic conditions of desert, this long piece of cloth was soaked in water overnight and then tied in the morning. The different layers of turban kept wet throughout the day and thus provided a great relief.

From region to region, the style of turban draping differs. Out of all the turbans, Rajasthani and Sikh turbans are especially popular. People in the Middle East, Central Asia and South Asia are known for tying turbans. Modern turbans come in varied sizes, colors and shapes. In the western countries, the turban serves as the hat for women. These turbans are mostly stitched so that they can be easily worn and taken off. 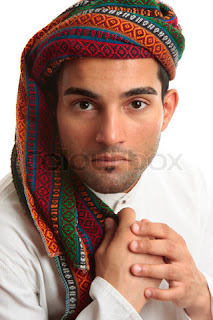 Sikh Turban
Well, turban has a lot of reverence and significance in the Sikh religion. People who join the Khalsa Panth are forbidden to cut their hair. Sikh men wear turban so as to manage their long hair. In the Sikh religion, the turban is known as dastar, which is considered to be a very respectful Punjabi word.

Rajasthani Turbans
Rajasthan is a very big state exhibiting a wide diversity. In Rajasthan, as you travel from one city to another, you’ll find men wearing absolutely different turbans. In Rajasthan, the turban is known as pagri or safa. There are certain parts in Rajasthan, where the size of turban is evocative to the position and status of the person in society.

Mysori Turbans
In the districts of Kodagu and Mysore, turban is known as Mysore peta. Here, the is considered to be a source of pride. Notable personalities are honored by presenting them the Mysore peta. This in itself is suggestive of the fact as to how much significance the turban has for the people in Mysore. In the district of Kodagu, men team their ethnic dress with a turban on the celebration of special occasions.

Turbans in Muslim Community
In Islamic religion, wearing turban is considered customary. Muslims call turban “imamah”. Most of the scholars in Muslim countries wear turban. Thus, it is considered an important headdress amongst the Muslims. Infact, even the men of honor and other eminent persons in the Muslim community wear turbans.